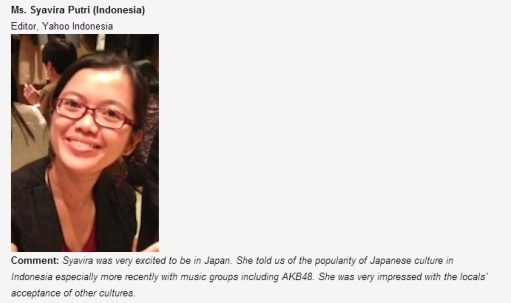 How well is Fukuoka known in your home city or country?
It is not known well, but I did know that it was a city in the lower part of Japan.

As a destination for visitors from overseas, what do you think are Fukuoka’s best assets?
The atmosphere of the city is its best asset. It is busy, has great food, and is a beautiful city with wonderful scenery. The fusion of tradition and contemporary found in Fukuoka is attractive for overseas visitors.

Did you have an image of Fukuoka before your visit? Has it changed?
Not really. I grew up with many Japanese things and it was just like I had imagined.

What kind of difficulties or inconveniences have you encountered so far during your stay in Fukuoka?
I can’t read Japanese and there doesn’t seem to be many English speakers in Fukuoka. The language was a problem.

What is your impression of the friendliness of Fukuoka locals?
The people of Fukuoka are very friendly and helpful. We had language problems though.

What is your opinion of the Fukuoka City tourist map ‘Now Map’?
I have found the map very useful. The only thing is that I didn’t find it until the third day! I wish that I had have found it at the airport when I arrived.

Would you recommend Fukuoka as a destination to your friends (for vacation/business)?
Yes! The only hard thing for Indonesians is that there are currently no direct flights. I tried my first hot spring and really enjoyed it. I also loved Dazaifu.

What area of town, building or landmark, did you find most remarkable or memorable?
The almost-full moon I saw from the bridge was delightful.